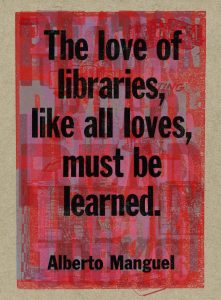 A library is about the people who come into it as well as the materials it holds in the collection.

It’s that time of year when books start returning to the library. We love it when books find readers, and we love to see what interests our community. In the “old days” a school library might be measured by how many books were checked out, but we don’t see it that way any more. It matters to us that we have a library of inclusion, something here to surprise those who browse the shelves. We’re not counting what you check out; we’re pleased by seeing how finding a book you didn’t expect delights you.

You might have noticed that we don’t even have a conventional book drop in the Saunders Family Library, and there’s a reason we don’t have that big hulking box which catches your book as you drop it through the slot. We like to talk with students and teachers when you return material. That’s the way we get to know more about what interests you. We believe that what interests you deserves a place on the shelves, and if it intrigues you, it will intrigue someone else.

Today I looked at the titles waiting to be reshelved and was astonished by the diversity of interests and the obstinate curiosity of students and teachers in the Upper School. And that’s how we view the Saunders Library–as a space that welcomes and celebrates these qualities. The people who enter through our doors matter to the intellectual and emotional well-being of Collegiate. This is your library.

Right now, waiting to be reshelved, you’ll find:
The Water Will Come: Rising Seas, Sinking Cities, and the Remaking of the Civilized World by Jeff Goodell. This title was on numerous best science books of 2017 lists, and just one sentence from the text explains why. “Sea-level rise is one of the central facts of our time, as real as gravity,” Goodell writes. “It will reshape our world in ways most of us can only dimly imagine.”

Deep Down Dark: The Untold Stories of 33 Men Buried in a Chilean Mine, and the Miracle that Set Them Free by Hector Tobar. Many of us remember the harrowing story of these men who were buried for 69 days in a collapsed Chilean mine in 2010. The world watched as the days ticked by, but to really understand their story as a physical, emotional, and spiritual journey, it takes a writer like Hector Tobar.

Respect Yourself: Stax Records and the Soul Explosion by Robert Gordon. This is a complicated story of social history, the civil rights movement, and Memphis. And you know the soundtrack. You’ve got these songs in your head and in your heart: Soul Man; Hold On, I’m Coming; In the Midnight Hour; These Arms of Mine; and I’ve Been Loving You Too Long.

And there are the memoirs with their beauty in truth telling.
The poet Gregory Pardlo brings his ferocious perspective to Air Traffic, his memoir of fatherhood, addiction, race, and ambition. There’s the incredible Darkroom: A Memoir in Black and White by Lila Quintero Weaver. There is no other graphic novel that gives the reader a glimpse of what it was like being a Latina girl in the Jim Crow South, struggling to understand a foreign country and the cruelty of prejudice.

And, fiction.
Power by Naomi Alderman is fascinating speculative fiction. She asks a “turn the world upside down question.” What would happen in a conventional society if the roles of men and women were flipped, so that women were the aggressors? Then there’s the post-apocalyptic world of Borne by Jeff VenderMeer and Emily Fridlund’s History of Wolves, her debut novel which was one of only four by Americans nominated for the Man Booker Prize longlist. 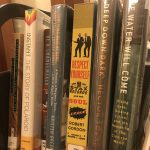 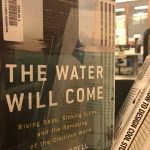 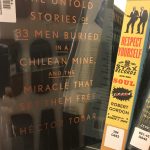 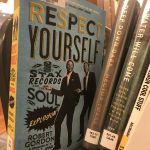 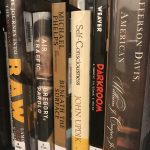 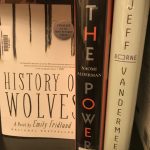 If you ever had any question about whether we are a fascinating community of individuals, one look at the books waiting to be reshelved will dispel the doubt. We’ve always known that in the Saunders Family Library.