I didn’t know I was interested in Mars. Certainly, I wasn’t interested in colonizing Mars or in humans becoming a two-planet species. I wasn’t, until I heard Joel Levine at TEDxRVA. Dr. Levine is a planetary scientist, now a Research Professor in the Department of Applied Science at William and Mary, who spent more than forty years at NASA studying Mars.

And his TEDxRVA talk was mesmerizing.

Mars is like Earth, or it was. It had rivers, lakes, and oceans. Now Mars has polar ice. But where did the water go? That’s a critical question for humans on Earth. The answer just might give us clues about what happens when a planet experiences a catastrophic climate event.

After hearing Dr. Levine, I couldn’t stop reading about Mars.

Mars has the largest volcano in the solar system. Volcanoes produce atmospheres and oceans. The atmosphere of Mars has methane gas. That’s important because methane is produced by living systems. Living systems!

In all this reading, I stumbled on The Martian by Andy Weir in the library’s collection. 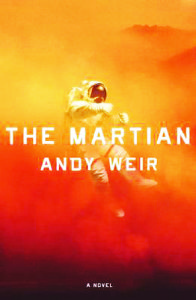 During a massive sandstorm that injures and separates him from the rest of the crew who are escaping from the planet, NASA astronaut Mark Watney is left behind, stranded on Mars. No communication with Earth…facing certain death in the inhospitable environment of the red planet.

But Watney is an ingenious astronaut. He’s a botanist, mechanical engineer, and survivalist. His story is part physics, part chemistry, part math and all tenacity. Just as I was surprised by my interest in Mars, I found myself drawn into the beauty of science and the topography of crater and plain. You can see a map of Watney’s travels on Mars at http://www.cannonade.net/mars.php

It’s no surprise that TEDxRVA invited me to explore something new, but I never imagined that it would be the Schiaparelli Crater. 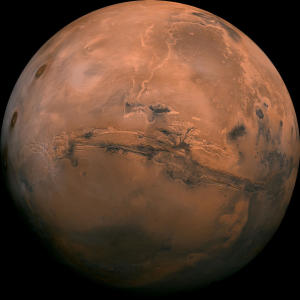 This mosaic of the Valles Marineris hemisphere of Mars is composed of 102 Viking Orbiter images. It shows the entire Valles Marineris canyon system, over 2000 kilometers long and up to 8 kilometers deep. The darker red circles on the left side of the planet are volcanoes.