We welcome Austin Tyner, a 9th Grader at Collegiate School, as our guest blogger.

“The doctors thought you wouldn’t be able to crawl, but I saw your determination and I have always seen that in you. At 11 months old you were crawling right along the floor, that hand didn’t stop you and thats when I realized ‘wow i have a special kid here. even when she’s told she can’t, she goes ahead and tries anyways.’”-Erin Lowrey-Carpenter, my mom

“I feel so very special to not only help other children, but my own as well.  The smiles of the children, after receiving their hand, lets you embrace exactly what these hands really mean to the kids.  Bravo to all the people who have helped develop and brought the idea to a reality! From the bottom of my heart , Thank you!”- Ward Tyner, my dad

I was born on January 10, 2000 with two good arms, a dose of stubborn, and one hand. According to my mom, when I was a baby my doctors thought I wouldn’t crawl. They thought I would just go right to walking. Obviously little baby me couldn’t have known what they were saying, or maybe I did and chose to disregard it, but at 11 months I was crawling across the floor. As I grew up, that tended to be my modus operandi.

As a student in Collegiate’s Lower School, I did extra push-ups for PE teacher Mr. Chapman, just to prove I could. I did handstands, donkey kicks, played with my friends, climbed the climbing wall and even named my underdeveloped hand my ‘lucky paw’ like Nemo’s lucky fin.  Laura Hall, Collegiate’s Lower School nurse, was one of my best friends and confidantes, and she told me that I had ‘the big C’- courage.  Middle School was a bit harder for me, as I was going through my awkward tomboy phase and worrying about things like 5th Grade math (haha, I thought that was rough!). I was the slowest shoe-tyer in the world, and I couldn’t put my own hair in a ponytail. Sometimes after PE, I would be late to class because I couldn’t tie my Converse fast enough, so I would have my friends do it. But I got over it, I got faster at tying shoes, I perfected the art of putting up my hair after a trip to the Shriner’s hospital (my first brush with prosthetics), I went out for sports: cross country, basketball, soccer, dance.

My dad first saw the E-nabling the Future site from the picture of the Iron Man hand that was on AOL in September. (E-nabling the Future is a grassroots, international effort to give people with 3D Printers an opportunity to make hands for those who need them.)  He texted me right away and I was pumped! I surfed the site and decided I wanted the Cyborg Beast hand, but not pink. Then, less than a week later, while walking around with him at the RVA MakerFest where my sister was showing off her robot Sparki, I saw Ms. Teresa Hockenberry, a librarian at Tomahawk Creek Middle School in Chesterfield County, and her students with a raptor hand – the newest model at the time. I was introduced to the crew and given a chance to try it on.

The moment I flexed and felt fingers closing for the first time is a feeling that can only be rivaled by the wonder of a baby discovering it has toes. It was too big, and clunky, and black, but it was like having super powers. 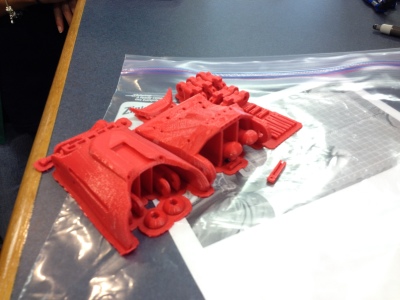 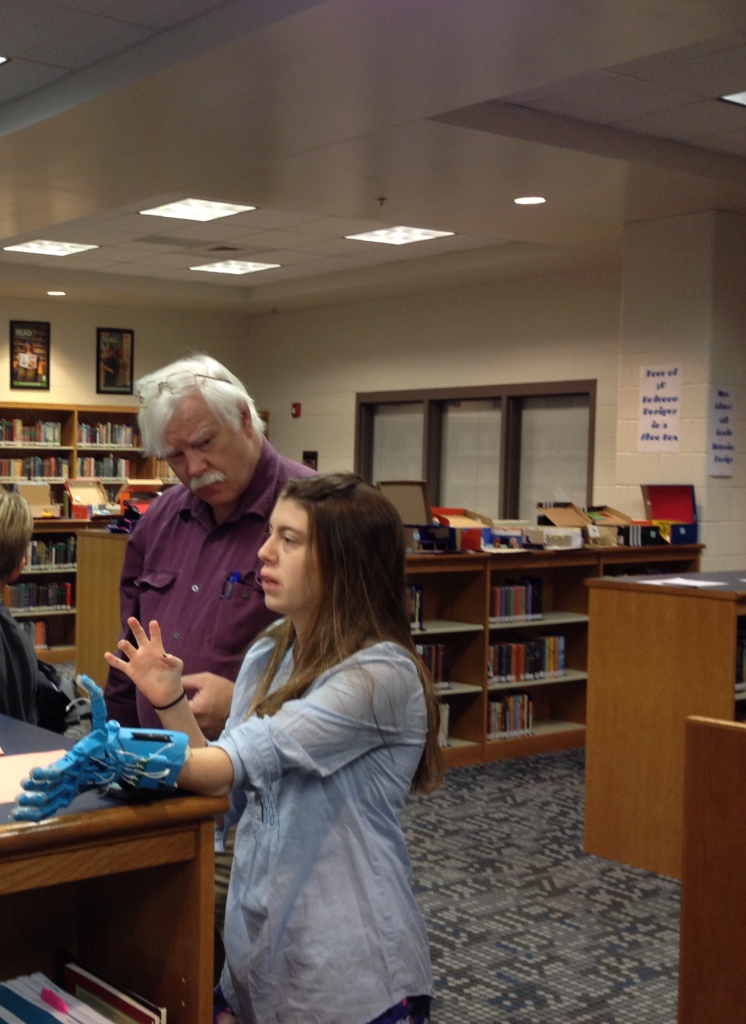 Ms. Hockenberry told me that she had extra tickets to a conference in Baltimore being hosted by Johns-Hopkins and the E-Nable people. I went to my high school homecoming dance that night, fell asleep at midnight, and woke up at 5 a.m. for the drive to Baltimore. When we got there, I was quite nervous, but also excited (and a bit disheveled, I slept through the car ride and forgot my brush). The E-Nable “un-conference” amazed me. There weren’t just people like me, but also other parents, siblings, physical therapists, prosthetists, scientists, military personnel, engineers –  everybody.  At lunch, we met an electrical engineer, and a nice man who owned a start-up company in New York. He worked with sensors for movies, and his friend got him involved with E-Nable. (I also crammed about five cookies into my tired self–they were delicious.) When we started with the hand, they took us step-by-step on how to put it together and Ms. Hockenberry’s team helped.  Towards the end, it was just me, Dad, and his girlfriend Corey. I picked Carolina blue after my favorite team, the Tarheels. 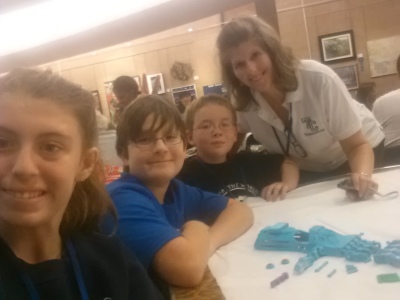 At the Johns Hopkins & Enable conference. Photo by Austin.

We put it together (Dad is an electrician, so he was naturally good at it), and it was actually pretty simple anyway. As I seemed to be the only teen in the room, I got to help. Mr. Peregrine, one of the original hand-receivers, helped me modify the strap, because he and I both have a working digit, where most have just a palm. I left feeling like a million bucks, and took my first steps with the hand by picking up my first item ever with my left hand: a Dasani water bottle. 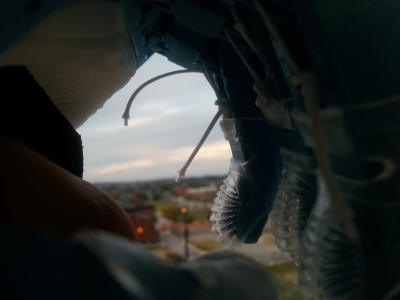 A view through Hansbrough.  Photo by Austin.

I have been keeping in touch with Ms. Hockenberry, sending her pictures of me using my hand and my friends checking it out.  My friends (thank God for them) have been so supportive, and everybody wants to know about my hand. I decide to name it Hansbrough –  a play on words, because it’s a hand, and my favorite basketball player of all time was Tyler Hansbrough who played for, you guessed it, the Tarheels. 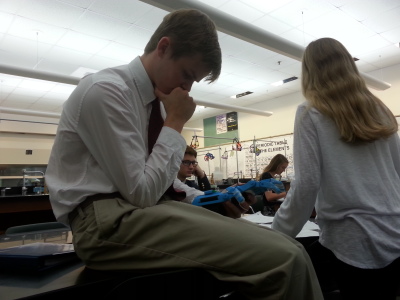 A friend checks out Hansbrough.  Photo by Austin. 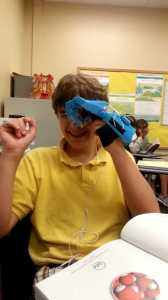 I begin to think, wow, what if we could get my school involved in this? So the wonderful librarians in Collegiate’s Upper School are in on my little project now, and I get up early on my one late arrival day to meet with them. The wonderful Ms. Chamberlain, Head Librarian of Collegiate’s Upper School Library, has even taken me see Mrs. Hockenberry at her school in Chesterfield.

During that visit, we decided that our schools should team up, and Ms. Hockenberry’s students are going to come to Collegiate! Also I suggested that we put E-Nable on our community service suggestions list, after my friend Gabby said  she would be interested in making a hand! I am so excited and I hope that this interest in 3D printing and hand-making will continue to grow and help many more people! I don’t really have an inspirational quote to sum up my feelings about this journey, but my all-time favorite Johnny Cash gets pretty close. “In a world that keeps pushing me around I stand my ground and won’t back down.”